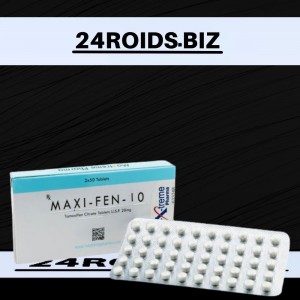 Tamoxifen citrate is a non steroidal anti estrogenic drug, used widely in clinical medicine. It is specifically a selective estrogen receptor modulator of the triphenylethylene family, and posses both estrogen agonist and antagonist properties. As such, it may act as an estrogen in some tissues while acting as an anti-estrogen in others. In breast tissue the drug is a strong anti estrogen and as a result is commonly used in the treatment of estrogen related breast cancer in women. Tamoxifen citrate was first developed in 1962 by the pharmaceutical company ICI. It was made commercially available in the United States not long after, but its initial use was for the treatment of female infertility, a purpose for which the drug does not seem ideally suited for. It was not until 1977 that the FDA approved the drug for use in the United States for the treatment of breast cancer. The drug has been sold by ICI in a number of worldwide markets under the brand name of Nolvadex.

In terms of its use in steroid users, tamoxifen citrate can help in two ways. Firstly due to the binding affinity of the compound it is able to help in the prevention of gynocomastia. Tamoxifen will compete with estrogen for the estrogen receptors in certain tissues, including the breast, and if it can bind to the receptor estrogen will not have an opportunity to interact with receptor and therefore gynocomastia should not be able to develop. When using anabolic steroids that can convert to estradiol (estrogen) this protection against gynocomastia can be invaluable. However it should be noted that tamoxifen citrate will not eliminate the estrogen or disallow the conversion to occur. Instead it attempts to counteract the effects of circulating estrogen in the body in those tissues that the drug effects. Therefore there is no evidence that tamoxifen citrate has any effects counteracting etrogenic side effects that are unrelated to the tissues that are not in the breast, liver or bone. Namely there is no real causal connection to any reduction in water retention and acne in users that begin taking tamoxifen citrate as it relates to estrogen. The second, and possibly more beneficial, aspect of tamoxifen citrate for steroid users is its ability to increase the production of luteinizing hormone and follicle stimulating hormone, and therefore increasing testosterone. This ability is why it is often used by steroid users during their post-cycle therapy. There are numerous studies that indicate that tamoxifen citrate can increase the levels of these hormones quite dramatically. Tamoxifen citrate does this by blocking the negative feedback inhibition caused by estrogen at the hypothalamus and pituitary, and this in turn will help to increase the production of these hormones. Unlike clomiphine citrate, tamoxifen citrate has also been shown to increase luteinizing hormone responsiveness to gonadotropin releasing hormone. Clomiphine citrate can lower this responsiveness over time. One of the possible side effects associated with use of tamoxifen citrate is the possible reduction of insulin-like growth factor levels. If these levels are reduced this could suppress the gains an individual can make slightly. However this reduction, if it actually exists, would not be overly significant with gains in muscle mass only being marginally reduced for the most part.

When it comes to dosing for combating gynocomastia that has begun to form, there is very little research. The limited research that does exist does point to the fact that doses of 20-40mgs per day are effective in treating the existing condition. However, anecdotally users have reported sometimes using doses of 60-80mgs per day. For use during post-cycle therapy users have anecdotally indicated that doses ranging between 20 and 40mgs per day are average. These doses have been shown to significantly raise levels of testosterone, luteinizing hormone and follicle stimulating hormone.