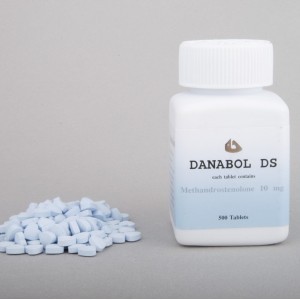 Oral Danabol was reported to be a highly effective mass AAS which provided impressive weight and strength gains. Most users experienced a 2-4 LB bodyweight increase per week with heavy water retention. With higher dosages gynecomastia (bitch tits) was a common negative side effect. Obviously much of this was avoided by those who reported co-addministration of Proviron and/or Novladex. When stacked with a nandrolone, some gyno problems seemed to lessen.

This was probably due to Nandrolones aromatization to a weaker estrogen called Norestrogen and the resulting mild anti-estrogenic effect that results in moderate dosage administration. Methandrostenlone becomes active in 1-3 hours with a half-life of about 3.5-4.5 hours. For this reason, dosages were spread through out the day to maintain blood serum concentrations at an elevated state. Massive dosages just were not necessary since a single 10-mg dose has increase androgen anabolic activity 5 times over normal with a correlating reduction in natural cortisol activity of 50-70%. Males using 5mg per 25-LBS of body weight broken into 3-5 equal dosages throughout the day have experienced impressive results. At dosages above 50 mg per day, results were not progressively quantitative. Most first time AAS users who used a daily dosage of 20-30mg daily experience significant results over a 4-6 week period. Women should not utilize Methandrostenolone but a surprising number did report the inclusion of the drug in AAS protocols. For those who insisted, no more than 10-mg daily for 3-4 weeks stacked with a very low androgenic product minimized masculization type negative side effects. Side effects such as increased liver values (toxicity) “usually” returned to normal within a short period of time after use was discontinued. High blood pressure, elevated heart rates, gyno, heavy water retention, and acne were all frequent reported negative side effects of Methandrostenlone use. Some literature on this drug supports DHT- like activity. Finasteride “usually” prevented this effect as well as possible prostate enlargement.

Danabol heavily suppresses natural testosterone production within only 10 days after continuous administration begins (dose dependent). Most note a sense of well being during use of this drug. Significant strength and weight loss follows discontinued use due to the loss of excessive water and HPTA suppression. So retained gains were only fair post-cycle. My personal experiences with this drug have led me to believe that no athlete should have ever stacked high dosage protocols of Danabol with Anadrol-50 or Methyltestosterone. It is a liver killer combo. A last note: Injectable Danabol did not have anywhere Nera as dramatic effects when utilized in its intended method. However, the injectable is orally active and as such was reported to be commonly used in this manner by filling gel-caps with the desired amount/dosage and subsequent ingestion. This is probably due to the fact that oral administration of a c17-alkylated AAS results in increased liver production of IGF-1. I have also learned that it was best to avoid Russian Methandrostenlone. (It commonly contains a large amount of unconverted methyltestosterone).