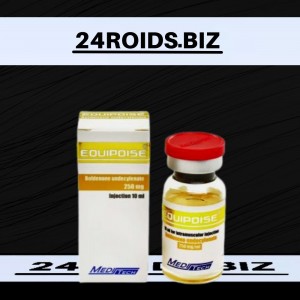 Large numbers of steroids filling the market shelves have made it increasingly necessary for steroid users to have a detailed account to the drug they are planning to employ for their gains.

Today we shall be discussing a well-known steroid which has made its mark in the steroid world due to its highly effective as well as long lasting results. It is commonly known as Equipoise.

Equipoise is the market name for a very popular veterinary injectable compound known as Boldenone Undecylenate. It is synthetically derived from testosterone and is known to consist of strong anabolic properties but weak androgenic nature. When this compound was first manufactured it was precisely used on horses to improve their appetite, body weight and over all disposition of the body. With changing times, this steroid started being combined with other anabolic androgenic compounds for the development of quality muscle mass and boosting muscle power. It is for this reason that this steroid came to be widely used in the bodybuilding circuit. It also holds great importance among sportspersons who intend to increase their skill and performance through its use. They mainly include athletes, cyclists, swimmers and power lifters.

Equipoise is known to render a firm and a defined look to the muscles rather than a bloated appearance which is often the case with other steroids. This ability of the steroid makes it all the more popular among professionals seeking a steroid during the bulking phase of the cycle.

Side Effects of Equipoise

Equipoise as a steroid is considered to be quite mild. If at all, it causes very slow aromatization of estrogen in the body. This takes place only if the steroid is taken in very high quantities for a very long period. Hence even the retention of water that takes place in the tissues as a result of this, is very mild. Since Equipoise has the ability to convert into estrogen, it might cause effects such as gynecomastia in men at high doses. Thus people who find themselves sensitive to the drug in the initial dose period itself should practice caution and limit their dosage. However, to reduce the effect of aromatization in the body, Equipoise can always be combined with Novaldex which makes its intake more tolerable. If the side effects still persist, the dosage should be combined with anti-aromatase compounds such as Femara, Amonasin or Arimidex.

Equipoise is also known to cause certain depressive effects on the level on endogenous testosterone in the body. Thus it is important that intake of a proper post cycle therapy consisting of Clomid, Nolvadex and HCG be made a part of the end of every cycle to keep the incidence of any form of ‘crash’ at bay. In order to make the post cycle therapy more effective enough, a gap of about 3 weeks is highly recommended.

To ensure the presence of Equipoise in the blood stream, it is imperative that the steroid be administered once a week in the body. The dosage quantity for men starts at about 400mg to 600 mg per week where as for that of women it should be within 50mg to 150 mg per week. Like mentioned earlier, Equipoise is among those steroids which ensure slow but steady gains. So if the user ingests it in large amount with the intention of getting faster and better results, he is only making himself prone to its side effects. On the other hand, to hasten the results achieved by it, Equipoise is often stacked with Anadrol or any injectable testosterone. It must be mentioned that if Equipoise dosage is combined with a compound which has strong androgenic properties, then the user runs very low on the risk of suffering from any severe side effects caused by its abuse.

Equipoise is known to be highly beneficial when employed it in the cutting cycle as combining it with a non-aromatizable steroid such a Winstrol, Halotestin or Trenbolone Acetate can help achieve remarkable results in the form of increased muscle firmness and density.