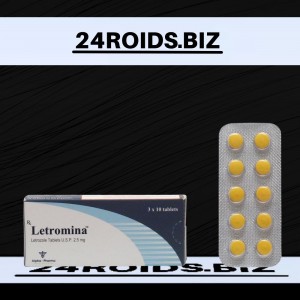 Letrozole is a highly potent estrogen-lowering drug that is significantly more effective than non-selective first generation aromatase inhibitors such as Teslac and Cytadren.

It is an anti-cancer medication normally used as a second-line therapy in the treatment of postmenopausal breast cancer when other estrogen lowering drugs such as tamoxifen have failed.

Letrozole was developed by Novartis and approved by the US FDA in 1997 under the original brand name of Femara. It is used off label by male athletes and bodybuilders to alleviate the estrogenic side effects caused by androgenic/anabolic steroids. Such side effects include fat buildup, water retention in the body and gynecomastia.

Leo Chemist offers Letromina (letrozole 2.5mg) tablets from Alpha-Pharma Healthcare. Each tablet is hygienically sealed in blisters of 10 tablets and packed in a box of 30 tablets.