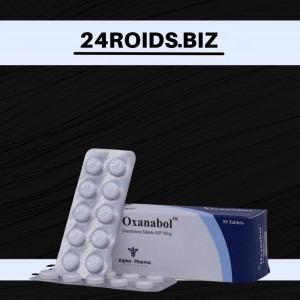 Oxanabol by Alpha Pharma is the company’s version of the hugely popular steroid known as Anavar, which itself is a version of another oral steroid, Oxandrolone, first produced in 1964 by the drug manufacturer Searle. It was designed as an extremely mild anabolic, one that could even be safely used as a growth stimulant in children. One immediately thinks of the standard worry, “Steroids will stunt growth”. But it is actually the excess estrogen produced by most steroids that is the culprit, just as it is the reason why women stop growing sooner and have a shorter average stature than men. Oxanabol will not aromatize, and therefore the anabolic effect of the compound can actually promote linear growth. Women usually tolerate this drug well at low doses, and at one time it was prescribed for the treatment of osteoporosis. But the atmosphere surrounding oral steroids began to change rapidly in the 1980’s, and prescriptions for Oxandrolone began to drop. Lagging sales probably led Searle to discontinue manufacture in 1989, and it had vanished from U.S. pharmacies until recently. Oxanabol (Oxandrolone) tablets are again available inside the U.S. by BTG, bearing the new brand name Oxandrin. BTG purchased rights to the drug from Searle and it is now manufactured for the new purpose of treating HIV/AIDS related wasting syndrome. Many welcomed this announcement, as Anavar had gained a very favorable reputation among athletes over the years.

Oxanabol (Anavar) is a mild anabolic with low androgenic activity. Its reduced androgenic activity has much to do with the fact that it is a derivative of Dihydrotestosterone. Although you might think at first glance this would make it a more androgenic steroid, it in fact creates a steroid that is less androgenic because it is already “5-alpha reduced”. In other words, it lacks the capacity to interact with the 5-alpha reductase enzyme and convert to a more potent “Dihydro” form. It is a simply matter of where a steroid is capable of being potentiated in the body, and with Oxandrolone we do not have the same potential as Testosterone, which is several times more active in androgen responsive tissues compared to muscle tissue due to its conversion to DHT. In essence Oxanabol has a balanced level of potency in both muscle and androgenic target tissues such as the scalp, skin and prostate. This is a similar situation as is noted with Primobolan and Winstrol, which are also derived from Dihydrotestosterone yet not known to be very androgenic substances.

Oxanabol is known as a good agent for the promotion of strength and duality muscle mass gains, although the mild nature of this compound makes it less than ideal for bulking purposes. Among bodybuilders Oxanabol is most commonly used during cutting phases of training when water retention is a concern. Oxanabol can be stacked with anabolics like Primobolan and Winstrol to elicit a harder, more defined look without added water retention. Such combinations are very popular and can dramatically enhance the show physique.

One can also add strong non-aromatizing androgens like Halotestin, Proviron or Trenbolone. In this case the androgen really helps to harden up the muscles, while at the same time making conditions more favorable for fat reduction. Some athletes do choose to incorporate Oxanabol into bulking stacks but usually with standard bulking steroids like Testosterone or Danabol DS. The usual goal in this instance is an additional gain of strength, as well as more quality look to the androgen bulk. Women who fear the masculinizing effects of many steroids would be quite comfortable using this drug, as this is very rarely seen with low doses. Eager females may wish to add other mild anabolics like Winstrol, Primobolan or Deca Durabolin. When combined with such anabolics, the user should notice faster, more pronounced muscle-building effects, but may also increase the likelihood of androgenic buildup.

Studies using low dosages of this compound note minimal interferences with natural testosterone production. Likewise when it is used alone in small amounts there is typically no need for ancillary drugs like Clomid/Nolvadex or NCG. This has a lot to do with the fact that it does not convert to estrogen, which we know has an extremely profound effect on endogenous hormone production. Without estrogen to trigger negative feedback, we seem to note a higher threshold before inhibition is noted. But at higher dosages of course, a suppression of natural testosterone levels will still occur with this drug as with any anabolic/androgenic steroid.

This makes clear that while estrogen is important in this regard, androgen action triggers feedback inhibition as well. In the context of the average bodybuilder using this steroid at a level to promote growth, we would probably expect that maintaining a normal level of endogenous testosterone release would likewise be very difficult.

To summarize, Oxanabol is great for strength and cutting purposes, but not for bulking or a lot of weight gain. In other words, any gains made will be only solid, high quality muscle. Thus, Anavar may even be ideal for use in bridges between cycles at very low doses under 10 mgs perhaps. For cutting/strength cycles doses between 50-100 mgs will be sufficient.