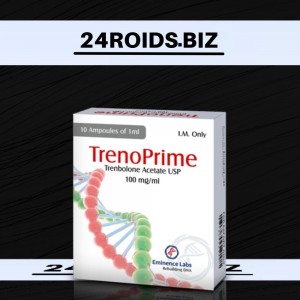 TRENOPRIME (Trenbolone acetate) is an injectable anabolic/androgenic steroid which is derived from the the steroid nandrolone. It’s activity however is quite different to the point that direct comparisons between the two are difficult to make. Trenbolone acetate is a non estrogenic steroid and is considerably both more anabolic and androgenic than its parent nandrolone on a milligram for milligram basis.

TRENOPRIME (Trenbolone acetate) was first extensively studied in 1967, described during a series of studies of experiments into synthetic steroids.

TRENOPRIME (Trenbolone acetate) is considered to be one of the strongest steroids available today. It is roughly three times more anabolic than testosterone and a very potent androgen as well. Users of Trenbolone often report incredible gains in strength and solid muscle mass. Trenbolone doesn’t convert to estrogen, therefore the gains seen off of this steroid are lean, quality muscle mass. The high amounts of androgen also work to bring about a defined “ripped” look to the user’s muscles. Although it doesn’t convert to estrogen, trenbolone being a nandrolone derivative does act on the progesterone receptor and can cause related side effects because of this trait.

Progesterone side effects are similar to those of estrogenic side effects and can include things such as bloat and gyncomestia . Because of this, users of trenbolone might want to consider running an agent such as bromocripten or cabasear in order to combat possible progesterone related side effects. Trenbolone is a versatile steroid and can be incorporated well into both bulking and cutting cycles. Users looking to bulk may choose to stack TRENOPRIME (Trenbolone acetate) with other steroids such as testosterone and an oral such as dianabol.

Users looking to run a cutting cycle will often look to stack trenbolone with other steroids such as winstrol and masteron. It is important to note that trenbolone will shut down the body’s natural testosterone production very quickly, thus making a post cycle therapy protocol essential upon the discontinuance of the drug.

It is necessary to run testosterone during and after a trenbolone cycle in order to clear the receptors of the compound and make recovery a little easier to accomplish. The high androgenic activity of trenbolone means that androgen related side effects are very common with this drug. These side effects can include things such as oily skin, acne, increased growth of facial and body hair.