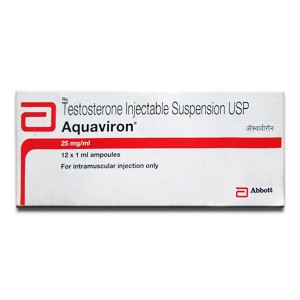 That same study also indicated that Testosterone exhibits the ability to inhibit adipogenesis (the storage of fat) as well as the ability to increase the size of motor neurons. Testosterone has been found to achieve its muscle growth and strength-promoting effects primarily through the interaction with the androgen receptor located in muscle cells as one of its primary mechanisms. Androgens such as Testosterone also increase red blood cell count via a stimulation of the increase of Erythropoietin in the kidneys, resulting in better oxygen transport throughout the body, thus increasing the endurance capabilities of the athlete.

Testosterone in general is regarded as one of the best mass-adding and bulking agents. Those who wish to bulk up will experience more rapid results with the use of Testosterone Suspension than with any other form of Testosterone. It has also been found that there is a relationship between the dose used and the amount of muscle growth whereby the higher the dose, the greater the growth experienced. Testosterone is what would be considered as the original anabolic steroid, manufactured naturally and endogenously within all humans and in most animal species. Testosterone Suspension can be utilized for any particular goal, as Testosterone is the most versatile anabolic steroid.